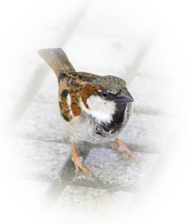 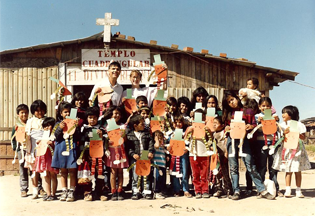 Dean and precious children pause for a photo at a meeting to share Bible stories and do arts and crafts at a Tijuana hovel church in November 1986. 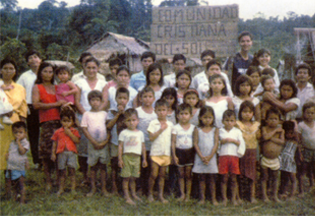 The Yaguas, living deep in the Amazon Jungle, worshipped the sun until Dean and team told them the story of Jesus in 1989. In time the entire tribe was converted and many other Yagua tribes near El Sol, Peru came to know, love and serve Jesus. 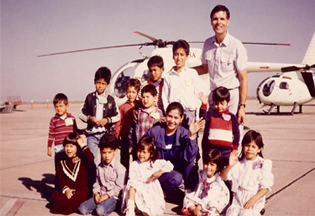 The first abandoned children to find a loving home and Jesus at Sparrows Gate ranch in rural Tijuana join Dean and Alba for a fun trip to an airport at the Tijuana border on the way to the San Diego Zoo in 1988. 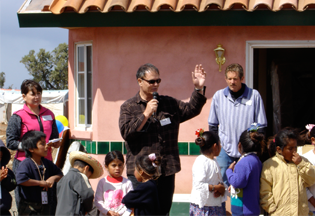 Dean Tinney offers a prayer of dedication for the Timothy House , a home for single destitute moms in Little Oaxaca. Also pictured is Tim Springer, who provided funds and oversaw all construction in 2006. 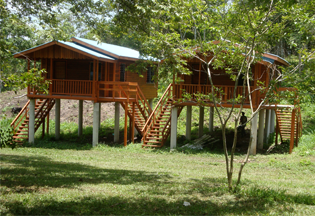 Sparrows Gate Mission cabins in Santa Elena, Belize were built in 2010 and will host short-term teams who come to share in the ministry.

In his teens, Dean Tinney felt God’s leading to share the Gospel with the poor, but he left the Church and fellowship with Christ for a business career. For the next 35 years, he was a driven corporate executive, entrepreneur and part-time professor of marketing at Cal State University, Fullerton.

Finally, a shattering mid-life crisis caused him to give up lesser ambitions in obedience to God’s original plan for his life. Like the prodigal son, he repented and returned to find the Father ready with love and forgiveness.

Dean believed that because the Bible says God takes care of the sparrow (and Dean never saw a sparrow begging for bread) that God would take care of him and the children he planned to help without ever asking for money. To remind himself of God’s unfailing provision and because energetic, cheerful sparrows remind him of children, he decided to call the mission Sparrows Gate. The word Gate (in Sparrows Gate) is a reminder to introduce children to Jesus so they can enter the gates of heaven.

Sparrows Gate Mission began on April 13, 1986 when Dean moved to Tijuana, Mexico to present video Muppet shows of Bible stories to children living in cardboard shacks. Since he did not speak Spanish at the time, the Spanish video programs (like a Christian version of Sesame Street) enabled him to communicate the Gospel with hundreds of kids in regularly scheduled weekly meetings in various Tijuana hovels.

In the beginning, the children’s faith mission was supported entirely by earnings from a part-time job Dean secured at a Mexican hospital. The day after he moved to Tijuana, he met Alba Gloria, the young woman who would become his wife.

Little-by-little, the mission grew to include a ranch for otherwise homeless children and other efforts to rescue desperate kids in Bogota, Colombia, Rio, Brazil and Asia.

In July 1987, Dean, with no funds, began to build a ranch for otherwise homeless children on land that was loaned to him by a Mexican Christian in a rural area just outside Tijuana. In no time the new home was built from scratch and was full of abused and abandoned children who came to know, love and serve Jesus!

In February 1989, Dean established a mission with the very remote, primitive and dangerous Yagua Indians in the Amazon. The tribe was intent on killing him and his small team when they set foot in their village but in time the entire tribe accepted Christ and mission friends from Colombia nurtured the mission in his absence. The amazing account is told in the book titled, “Finding God’s Playground.”

In July 1992 an 85-acre Tecate ranch for otherwise homeless children became a reality. The kids moved into a single double wide trailer until dorms could be built.

In August 1997 efforts to help poor Oaxacans in migrant Ensenada camps began and this led to building a Christian Elementary School and home for single, destitute moms and their kids in Ensenada.

Dean lived in Southeast Asia as a youth for five years which made an indelible impression on his life. Years later, as an adult, he returned to this region of the globe that he loves and has ministered in Hong Kong, Singapore, Malaysia, Myanmar, Laos, Korea, Thailand, Vietnam, Japan, China and Indonesia. But he found a second spiritual home in the Philippines in March 1999, where he began to rescue homeless street kids in Manila, Cebu and Davao. Today, Sparrows Gate partners with Shepherd’s House, for homeless street boys in Agdao, Davao.

Though Dean is pushing 80, he says, “After more than 35 years of rescuing poor children, I believe it’s just the beginning.”